When we arrive we find Nick on the wall, and Helen and Hazel below. Where’s Robin? Nick says that his German friend is over, and a bunch of friends are round … they wanted to come climbing this morning but Nick reckoned that would be “too much going on”, so they’ll be climbing this afternoon.

Instead Hazel will belay. And Annie, another teacher, will be along soon too, to see the set-up before she and Nick take 3 more school students climbing. (The next 3 are wheelchair users: they’ll be bringing a hoist for the student that doesn’t do standing transfers. Great! 🙂

Clare is going to climb near the entrance, where the wall is slopey like the Slab. There are nice shapey red holds. Nick and Helen help Clare into the harness: I hang back, because helping Clare stand doesn’t really have to be a mum role.

“What’s the strategy?” I ask. Nick reckons Clare is reaching well for hand holds now & should look down to find foot holds as well. 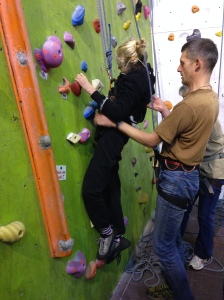 And Clare pushes up from her feet.

But she is leaning back a lot. Doing a stand with Nick was fine but it meant the Nick & Helen combo for putting the harness on wasn’t so effective. Clare’s neck gets tired.

Clare rests and we chat to Annie from Kelford School. This is the school attended by the three soon-to-be climbers – who will be the first from Kelford, as the other students are from Hilltop School.

I help Clare balance on her feet, and Nick and Helen adjust her harness. Now for Climb 2 …


The harness is much better. Clare keeps going. Hands and feet are impressively still in action. 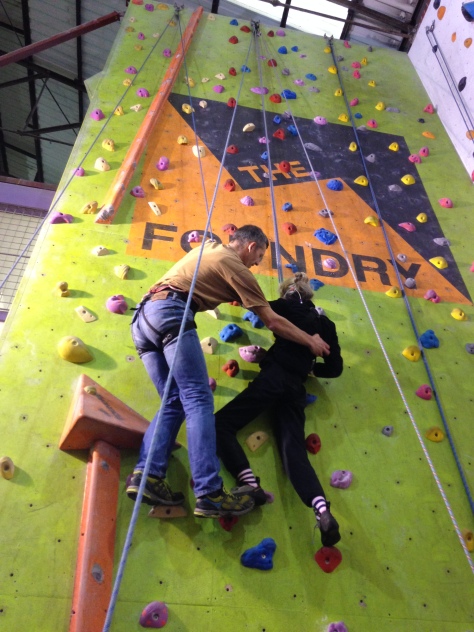 At last Clare comes back down, after a long effort. “You did well”, says Nick. “Arms can get tired they are held up for a long time – it makes my arms ache”. “Sorry”, says Clare. “No need to say sorry,” I butt in, “after all we’ve heard about what Robin has done to him!”

Clare’s forehead is crinkly with tiredness but she’s still smiling. I wonder about another climb. Clare asks is there is going to be a “cake break”.

Heh heh, yes, there can be cake. But Clare should be done with climbing first.

Clare rests while carer has a go at climbing, followed by the entertaining family duo, Robin and Hazel. 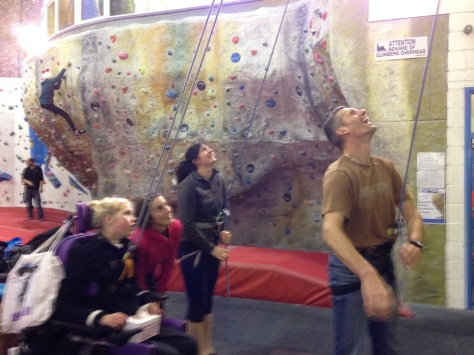 The third climb is not so high. But it goes well – Clare has learnt the patterns of the first few red holds. 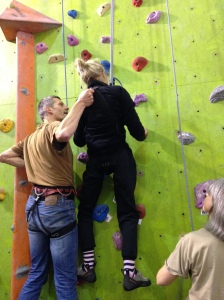 Group pic taken, then Hazel & I go to fetch coffees and a couple of cakes. Two Sundays ahead looks a good date but we decide on next Sunday evening as Clare is improving fast. Keep up the momentum….

Next time we meet over at the Slab near the nice Reds. Clare and I had been wondering if Robin would be there today, and he is … and Hazel too, on the wall when we arrive.

Half term is all but over and everyone has tales to tell. Clare says that Paloma Faith had been amazing live, and we’re expecting some Whittaker adventure tales from the family trip to Norfolk and from Robin’s German friend’s visit to Sheffield.

“Have a nice time with your friends last week?” I ask Robin.

“Yes, went cycling in Greno Woods”, says Robin. He starts talking about the 12 foot drop. Lasse from Germany ran the drop first – straight over. “Woo, sounds scary”, I say, not yet realising where this tale is going.

Robin flew over next. Then Lasse again. Then Robin. Then Lasse wanted to try it on Robin’s new bike. Robin went to the bottom of the drop to get a photo – but …”

“No, the bike’s fine! Being repaired. His helmet was destroyed though…”

Robin is still giving details of the wipe-out, like ‘scorpion-flip’. “My god, was his back hurt?” I ask, horrified.

“Luckily not. He was unconscious though. Another friend phoned an ambulance. I went with him to Sheffield Children’s Hospital.” Robin now gets out his mobile and shows us an x-ray photo of a spectacularly broken collar bone.

I ask who phoned his parents, and Nick said that had been his job, along with (later on) collecting the bikes. Robin and Nick add details about the hospital stay … very tall 15-year-old with feet hanging over end of Children’s Hospital bed. Luckily sent home after couple of days.

Wow. That was some half-term. Not good. So the family didn’t actually get to Norfolk? Apparently they did, later in the week …. and saw some seals, says Hazel.

Time to get cracking on a climb.

Clare isn’t really 100% today. I’d wondered whether to cancel, but she was certain she still wanted to climb. Her voice is fainter today. She’s been having some worse nights and ending up on oxygen, though it’s probably just a minor cold.

Nick says Robin and Helen can do safety and pulley ropes for Clare, and he’ll climb, with Hazel belaying for him. There is a quick trial of the ropes … Hazel has a sandbag to counter the weight difference and we laugh because it nearly lifts.


First climb. A good effort with hands and feet. In the rest, Hazel belays for Robin, who wants to climb without hands. Just elbows maybe-? Nick tells him to use his hands because he doesn’t fancy any more time in A&E. Robin allows himself to hold the “smears” with his hands.
The second climb gets off to a good start. Good use of feet to push up.
There is some “One more!” going on.

Clare still looks happy to keep on pulling though. She gets higher than on the first climb.

What a superb foot push.


It’s Clare who says “One more” at the end. Afterwards we agree it’s certainly been a worthwhile effort, even without Clare on top form. 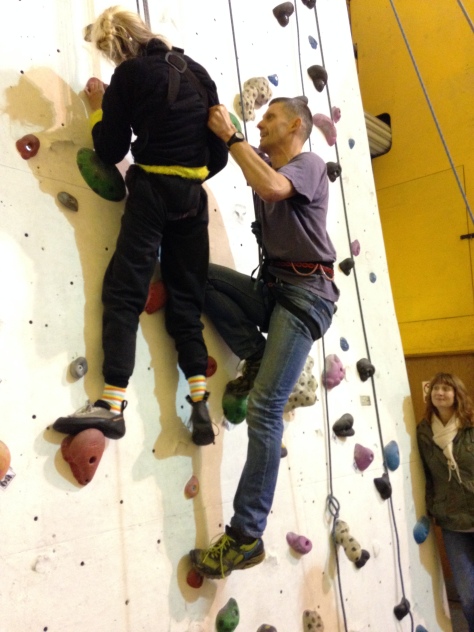 Robin nips up the wall opposite on auto-belay, then belays for Hazel and Helen, who climb interestingly numbered routes. Term starts tomorrow (“I can’t wait”, says Clare). The 3 wheelchair users will have climbed twice by the time we next meet. See you in 2 weeks!

One thought on “Half-term momentum”