Clare and I arrive to the sound of Sultans of Swing, which I suddenly remember from our first Foundry session back in Feb. What is also the same is the Slab: this is the slightly slanted zone/block where Clare first tried a climb.

What is different, is that Clare has no ventilator attached! Recent chunks of time off the vent have now built into pretty much whole school days (3 days managed so far). 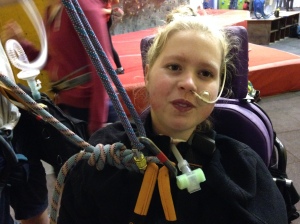 It’s been 28 months since Clare’s stroke, and it just goes to show you shouldn’t believe the “improvement window is the first 2 years” myth. Clare and I know of super-fast recoveries but also 7- and even 16-year big improvements. In this uncertain life we have taken the approach: “live your life NOW and any improvements that happen are a bonus”. Plenty of life lived, and plenty of bonuses so far. Including climbing – both categories.

Anyway, is Clare going to climb off the vent? Good question. And parked for now …

We are talking about music while Clare gets into the body harness. Robin has been watching Metallica’s Glastonbury performance on TV, while Clare and I watched Friday’s Glasto highlights on iPlayer, and Helen’s brother has seen Metallica live. Nick has enjoyed the ‘chilled’ music playing at The Foundry this morning … Dire Straits & Queen & the like.

So, the climbing. Nick is pointing out the plentiful holds. The nonverticalness of the slab wasn’t helpful when Clare climbed with a jumar but if she’s using the holds it might help. There are enough holds here for Clare to have a real chance of using her feet.

Right, decision time, what about the vent? Is Clare going to climb without it…?

I’m not sure if she’ll manage strenuous movement without ventilator backup – we haven’t tried yet. I’m dithering. But Clare wants to give it a go. Well, it will be easy enough for Robin to attach the vent if Clare needs it while she’s on the wall. (Ha! You weren’t thinking you’d get off carrying it, were you, Robin? 🙂

Robin takes the silent vent off the back of the chair and I tell him how to turn it on (very easy, just one button). He’ll also need to take off the ‘swedish nose’ on the end of the trache. (Mild amusement … why “nose”?! It’s because it humidifies incoming air, same as your nose does.)

Clare starts off well. She is placing her hands with some help, and pulling up. And she is using her feet a bit. 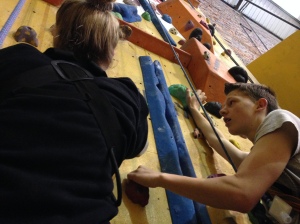 Up and up some more. Not many photos though, as I’m busy at the wall pulling through rope to assist Clare and Nick.

Robin is wondering if Clare should be back on the vent. “Come down, then”, I’m saying. Either Clare’s breathing patterns are worrying Robin needlessly, in which case there’s no rush to reconnect the vent, or she is struggling a bit, in which case the vent’s moderate pressures won’t be enough for rapid improvement.

Clare is smiling as soon as she lands back in the chair.

She looks OK. How did it feel, Clare, using your legs? 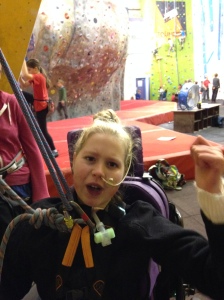 So far so good but I’m thinking we could turn the vent on for the second climb rather than push our luck. Clare agrees.

On the second climb Clare gets higher.

Helen is excitedly pointing out the way Clare draws up her knees as she pulls down. Clare’s feet are seeking holds. Pushing from her feet makes Clare’s body swing round, and Nick is calling instructions to Robin to steady her. 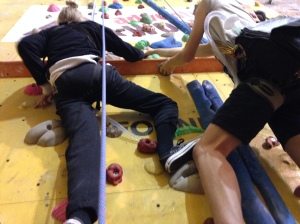 The vent tubing gets trapped as Clare and Robin climb up past the chunky ledge that crosses the wall, but Robin digs it free.

The ledge provides a really good push up for feet, though Clare’s body swings round some more.

A bit higher, and then back down, cheerful. Great climb!

Nick says a helmet will be a good idea in future, in case foot pushes swing Clare’s head round to the wall. We undo the twisty bun and try on a helmet he’s brought along. It’s perfect for the team photo 🙂

Helen goes for coffees as we don’t have a carer with us today. Nick and Robin get the ropes down and I ask about Nick’s 60 mile running event last weekend. Best part of 15 hours of running, with a 3 mile run home afterwards. Nick is training for the Ultra Trail du Mont Blanc to raise money for his schools and for climbing equipment for disabled youngsters (mail him at nick.whittaker@rotherham.gov.uk ).

“Unbelievably, I’m fine … I’ll do a 10 mile recovery run on Saturday and see you Sunday,” Nick’s email had said.

“He wasn’t ‘fine’!” says Robin, cheerfully. “He was sick! And exhausted – I had to look after him when he got home!”

“Are you worried about picking up injuries in long runs before UTMB?” I ask.

It seems not. One ankle is twice as wide as the other, but this doesn’t stop Nick climbing to the top to get our ropes down.

And now we take a proper look at Robin’s nose – it is purplish and wider than usual. He was kicked during football. Ouch – first aid & sit out rest of game? No, played on! (I decide not to mention my two mildly purple toes from Thursday, when the power chair veered over my foot as Clare & I struggled down a steep slope – I sat down for half an hour to ice my foot.)

We’re drinking coffee now. Clare has a couple of spoonfuls of my cappuccino. She worked really hard this morning and now looks zonked. We might try an evening climb next, as in 2 weeks’ time it’s Helen’s big event (mum’s wedding). Will Clare be too tired? Hard to say and Clare is actually too tired to even contemplate it now … back home to rest!

Nick & Robin & Helen pick a different place at The Foundry each time we go, so when Clare and I roll in we are looking round for them…

Spotted! There they are, roughly where we climbed last time. I remember commenting on the Dalmatian holds just here … large and white and all-over spotty.

Nick summons Clare to the wall straightaway, to look at the Dalmations. These holds are more grabbable than most: Nick’s new suggestion is to try pulling up from them instead of using the jumar … see how it goes. A future addition could be to use stirrups for Clare’s feet, which will be lifted when she pulls down with her arms, allowing her to then push with her legs as well.

It will be harder gripping the holds than the jumar, but there’s also a harness for me this week, with rope and gri-gri (Nick reminds me how to use it), and pulleys so that for every metre of rope I pull through Clare will rise 50cm. I give my iPhone to carer Rachel, who gets cracking on the photography.

Clare reaches up for dalmations, using the arm lifting power that she’s developed through climbing. Robin and Helen both help with hand positioning. Once Clare’s hands are on top of these shapely holds her fingers wrap around them fairly well.

Clare pulls down. Nick pulls down, and I pull rope through my gri-gri, and we have lift-off. 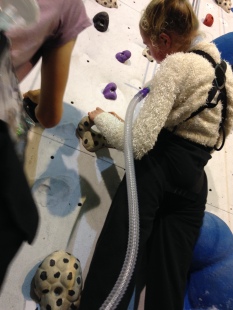 The technique works! Clare and Robin grapple with a couple more spotty holds, and then Clare rests briefly before Take 2.

It’s a chance to quiz Nick some more about his mountain race: the Ultra Trail du Mont Blanc. One hundred mountainous miles, running day and night, fund raising for his schools … Nick had told us about it when we’d first met, and I’d thought “hey, that’s a pretty exceptional way for a headteacher to raise funds!”

Then last week Nick sent out the details, and Clare and I watched the event video: http://www.ultratrailmb.com/page/1/The_event.html
What?!?! How on earth?!?!

Nick has extended his fund raising aims to include support and specialist climbing equipment for young people with disabilities, as well as expedition equipment and sensory equipment for the schools. I’m delighted Clare’s own amazing experience of climbing is opening doors for other young people. (Nick is aiming to raise £30 per mile, so if you’d like to contribute or get more info, mail him at
nick.whittaker@rotherham.gov.uk ) 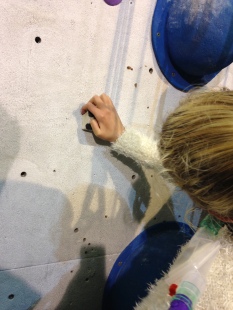 Practice gained from first meeting with dalmations seems to be helping Clare with her grip.

She climbs as high as before … 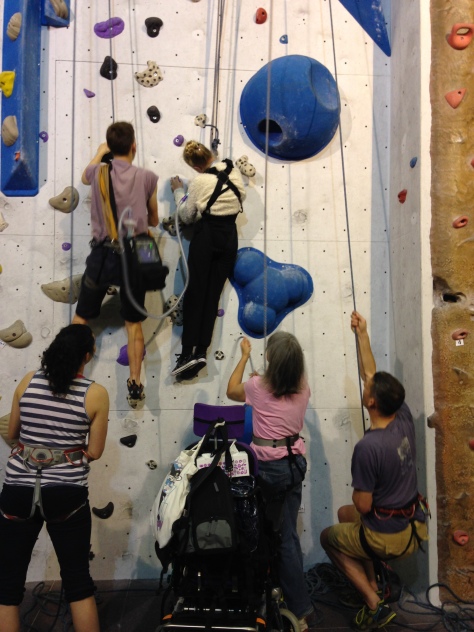 And then a bit higher… Then, surprise! Clare’s leg is lifting up onto one of the big blue bulgy protusions … she’s trying to push up with her feet! 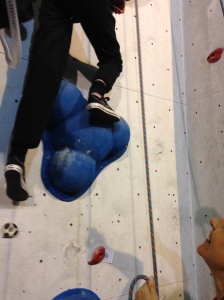 Almost. I’m nudging her foot onto the bulge, but her body is swinging round a bit. She comes down for a rest. Not too tired yet, and really enjoying the climbing.

All of us are laughing during the second rest, as Robin tells us how he’s accidentally injured his dad over the years, e.g. with karate kicks. Nick laughs as much as anyone and owns up to self-inflicted injuries too … the skin graft is from when his arm went into a heated mangle, which seems to relate to a climbing accident in the kitchen when he was a boy. Your mum can’t have been pleased, I say (surely an understatement). 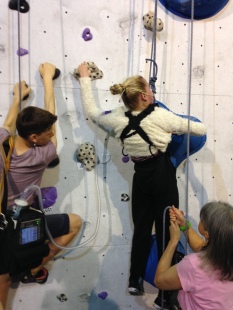 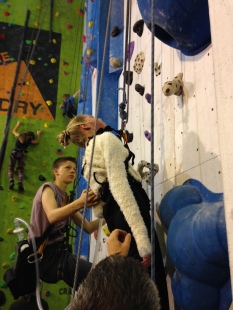 It’s not so surprising this time when she raises first one foot then the other to get a push off. Robin provides a steadying force, and Nick and I nudge her feet towards a flatter part of the surface. 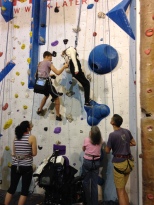 Whew! That session was an eye-opener. Clare was very happy with it, and says “I enjoyed using my leg myself.”

Next weekend it’s Helen’s Duke of Edinburgh practice trip, taking kids canoe camping. Nick is running a 60-mile marathon to train for the UMTB. See you in 2 weeks!