So, back at The Foundry on 23rd April.  Only 1 day has been spent trapped in bedroom by broken down lift and that day is parked in the past.

Since last Foundry visit Clare and I have been to Decathlon for cycling gloves, hopefully to help Clare keep her hands on the jammer whilst being able to pull them off it too.  I’ve dug out remnants of strong Velcro tape that Speech & Language gave us in hospital to stick photos to a communication board. And I’ve brought Evostik …. ahhh, nice smell!

The plan is to Velcro the gloves to the bar.  Clare tries on the gloves and it seems pretty clear where the Velcro will be needed.  Nick reads from the Evostik packet that bonds take 24 hours to reach full strength, though based on my experience of patching jeans in the seventies I’m hoping we can get away with just 5-10 minutes drying time, before pressing touch-dry glued pieces together.

The other new plan is to photograph or film some climbing: Robin puts on a bright yellow helmet to carry the automatic camera. 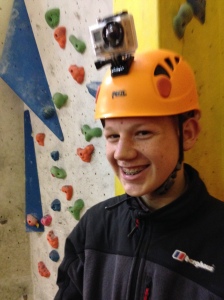 While the glue does its thing there is time to admire (or joke about) the colour match between Robin’s helmet and his dad’s tshirt, also looking good with Helen’s green today.

Now it’s time for Clare to get into the body harness. We attach the sling for the vent (which adds another zingy slash of yellow).

Robin asks briskly: “So how high are we going?” Obviously he’s thinking about the top.

Ready to start. There’s still the question of the vent tubing – does it go over or under the harness?  It seems we have to figure this out every time.  Under looks better while Clare is stood on the ground.  But Robin remembers it should be over, so it doesn’t detach (so often) while Clare is reaching and pulling.

Upwards.  Clare lifts her arms so much better than she used to, I’m saying.  The training effect of climbing.

Robin is encouraging Clare.  It is teamwork.

The Velcro has failed on at least one side. Robin is helping Clare place her hands. But Clare seems actively to be doing both sliding and pulling.

“We going for the slide?”

Now Clare is really high up. Higher than she’s ever climbed.

“I think you might make it!” Robin is saying.

It’s tricky right up at the top. The wall seems to be bulging outwards so it’s hard to slide the jammer up.

And/or Clare is now tired.  I can’t actually see her face. I’m thinking I’d notice if her head was wobbling backwards of if she looked trembly.  Though I’m not totally certain.

I’m looking at the whole scene. Necks are bent upwards. Nick and Helen are totally focused on the two-person climb.  I point the iPhone upwards for yet more photos but Clare and Robin are tiny figures up high. 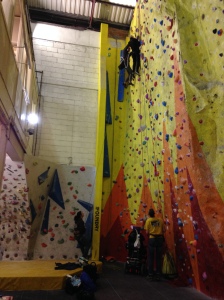 “I can’t see if Clare’s OK!” I call cautiously. Nick relays, sends on the message as a question.  “She’s fine!” Robin’s voice floats down confidently.

They are so close to the top.

“Touch the top!” says Robin, and demonstrates. Clare reaches up … that arm lift! wow … she touches the top.

Whew. Cheering from us below.

Robin and Clare shake hands. I ask them to do it again, for the photo.

Now to get down. I untie that knot I’ve been taught about.  Nick and Helen and Robin get Clare down to the waiting wheelchair for a rest. 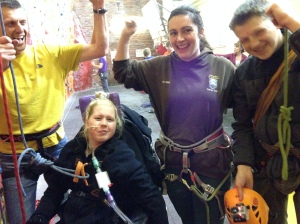 I’m really, really impressed.  With Clare’s climb to the top, certainly. Also with the climbing partnership side – it’s been an eye-opener. The 5th climb together.  Who would have thought a couple of Y10 school students could achieve this?

While Clare rests we take a look at the gloves.  Velcro gripping power has overcome the strength of the young glue bonds and two of the four Velcro pieces have become unstuck, meaning neither left nor right glove has retained a Velcro grip on the bar.

We can’t see what the camera has captured yet but we look at some previous stuff on the robwhitt youtube channel.  Robin’s video of his France holiday gets its first like 🙂

Clare says she isn’t too tired for a second climb. She sets off strongly, effortfully. 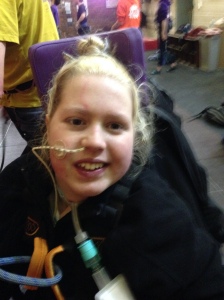 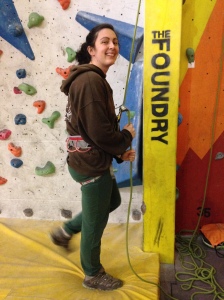 She does some good pulls and goes upwards but finds her muscles need more rest. Back down. Nick and Robin take the gloves for more work.

I’m still reeling from the climb to the top. I’m going to read Karen Darke’s climb up El Cap. And we’re all looking forward to seeing the pictures from the headcam.

Talking of which, enjoy:

You need to watch this, if only for the sound of Robin chuckling all the way down. “And you said we weren’t going to do it this time, dad!”

One thought on “Topped out!!!”